Broly vs. Jiren Will Be One Hell of a Battle in Dragon Ball

There are still many mysteries that Milky Way challenges us to discover and solve. One of them includes some odd yet fascinating stellar streams, some river-like structures made up of stars.

These cosmic features puzzle astronomers’ work, especially when it comes to how they actually formed. But this is about to change. A new paper aims to bring more answers to a long-standing case of mysteries.

A team of researchers succeeded in reproducing the formation steps of the newly found Cetus streams via computer work. What they found is genuinely intriguing.

How they did it?

Using a supercomputer, the team reconstructed the formation of the stellar stream via a series of high-resolution numerical simulations. The result? A fantastic image of the Cetus Stream progenitor before being devoured by our galaxy. Great, right?

Prof. Zhao Gang, the lead author of the study, released a statement discussing the finding. He said:

“Our work shows how the Milky Way slowly peeled apart and swallowed a dwarf galaxy with a mass of about 20 million times of the sun over a period of 5 billion years.”

Here’s the image of the Cetus stream, reconstructed by the team: 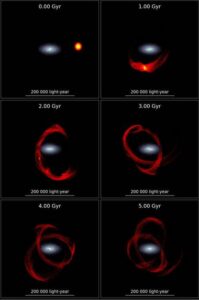 What Are Stellar Streams and How They Die

Stellar streams are actually fragments of dwarf satellite galaxies devoured by our galaxy, but that’s not how their lives end.

Milky Way is not fully digesting these stellar streams even if swallows them completely. The accretion process is long and complicated.

The stellar streams are peeled just like an onion: layer by layer from outside to inside by something called tidal stripping.

But, then again, this is Milky Way’s job. It has to continually swallow dwarf satellite galaxies in a process dubbed “galaxy merger.”