Can you imagine what our planet might have looked like in its early years? As challenging as it might be, this imagination exercise actually helps. At least, that’s what a team of researchers believes.

Earth billion years ago was different from what we see now, and we have proof. Thanks to some wise geological detectives, we can explore a new idea of how our planet was once: a calm water world.

A team of researchers examined the characteristics of our planet’s mantle over its long history. The findings are genuinely intriguing.

Apparently, Earth was a peaceful water world, with almost no landmasses at all. Can you picture this?

The team, led by Junjie Dong, a planetary scientist at Harvard University, calculated the water storage mass in Earth’s thick blanket as a mantle temperature function.Â

A vast amount of water is believed to be stored deep underground but as hydroxy compounds (oxygen + hydrogen). That could mean the water is stored in two high-pressure parts of the hydrous wadsleyite, ringwoodite, and volcanic mineral olivine.Â

Rinwoodite and wadsleyite are vital because they can comprise up to 1 % of H20 by weight, respectively, 3 %.Â

“[…] the additional water in the mantle today would have resided on the surface of the early Earth and formed bigger oceans.” 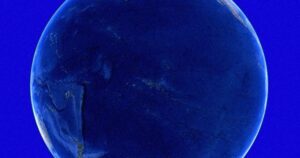 According to the team’s findings, if the mantle’s water now is more than its storage capacity in the Archean Eon (2.5 and 4 billion years ago), Earth could once have been a water world.

Such a thing is in agreement with previous research that claimed Earth 3.2 billion years ago had way less land than it does nowadays.Â

Both findings can help scientists answer some of the most burning questions about other things of our planet’s history. That includes where life emerged approximately 3.5 billion years ago.Â