Dragon Ball Super Manga Reveals a Surprising Side of Raditz

As a new study about the world’s biggest ice sheets emerges, we learn that there might be bright days after all.Â

A team of bold researchers led by the University of Michigan released a new report about a doomsday glacier: it’s stable! The new findings include a simulation of West Antarctica’s Thwaites Glacier, considered one of the world’s biggest and most unstable glaciers.Â

The Thwaites Glacier is a Survivor

Researchers modelled the collapse of different heights of ice cliffs and found some intriguing new things.

How they did it?

The team mixed some variables of ice flow and ice failure for the first time ever!

The new technique showed that thinning and stretching of ice and some sustaining from trapped hunks of ice might decrease the effects of fracture-induced marine ice-cliff weakness.

“So the ice spreads out and thins faster than it can fail and this can stabilize collapse; […] the ice can’t thin fast enough, that’s when you have the possibility of rapid glacier collapse,” explained Jeremy U-M, associate professor of climate and space sciences and engineering.Â 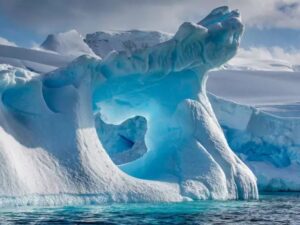 Researchers also discovered that icebergs that experience “iceberg calving,” might fend off than contribute to tragic fall. That means if the ice parts get trapped on outcroppings in the ocean floor, they can actually exert back some force on the glacier to help sustain it.Â

Moreover, the researchers state that even if the glacier doesn’t tragically fall, uncovering a tall cliff could still create enough havoc to kick a retreat at a few kilometres annually. Such a thing is almost 20 football fields!

That claims that if the height of an ice cliff reaches a specific threshold, it can crumble right away under its weight triggering a chain reaction of ice cracks. The aftermath would be unimaginable.

Currently, the Thwaites Glacier in Antarctica is moving closer to that threshold. What does this mean?

The glacier could add up to 3 feet to the sea level rise. To paint a picture of that, imagine something the size of Florida.

The team will continue the work to figure more things out about the future of other doomsday glaciers.