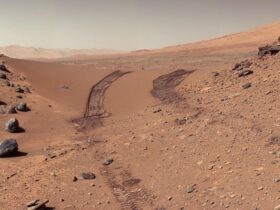 Greenland’s melting glaciers turn into the worst-case scenario after a recent discovery. Researchers found that the ice sheet is releasing a massive amount of mercury into rivers and fjords.

The high concentrations of mercury came from downstream of three glaciers. Now, ecosystems are bathing in a heavy metal, which soon can end up in the food web.

Too Much Mercury From Greenland

Greenland’s glaciers have a hard time surviving due to continuous melting. And now, finding mercury in the ice sheet is even worst.

“[…] mercury coming from climatically sensitive environments like glaciers could be a source that is much more difficult to manage,” explained Jon Hawkings, an environmental biogeochemist from FSU and the German Research Center for Geoscience.

Things become more complicated given Greenland is a huge exporter of seafood. The area is known for its precious marine ecosystems that soon might have to suffer a lot.

Mercury is a natural and widespread element originating from volcanic eruptions, wildfires, and erosion. However, in the last century, industrial activity has been releasing this heavy metal into the atmosphere in massive concentrations. That’s a reason for how it ended up onto glaciers, ice, and snow.

Previous research found moderate mercury amounts in run-off from melting glaciers, but Greenland was a total shock. It was discovered that the concentrations in this area are two orders of magnitude bigger than what scientists detected in other Arctic rivers. So, what’s to blame in Greenland’s tragic case?

As per the new paper, the high concentrations have little chances to come from industrial sources. In fact, they originate from eroding rock beneath Greenland’s ice sheet.

That region is naturally mercury-rich already and is actively increasing due to climate change. Unfortunately, such a tragic scenario has now reached a tipping point, and we should expect the mercury concentrations to rise even more.