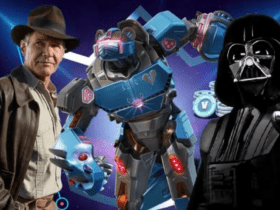 With all the news regarding what is rapidly turning into a real traffic jam around Mars’s orbit, many of us overlook the beauties of what can be found on the Moon.

China’s Chang’e 4 lander and Yutu 2 rover entered sleep mode for the nearly 14-day lunar night. During that time, radioisotope heater units kept them at the adequate temperatures when the harsh environment of minus 190 Celsius tried to take them down.

Waking up on February 6, Yutu 2 rapidly came across a peculiar rock that stuck out from the nearby Lunar landscape.

The rock, which the Yutu 2 team agreed to use as a “milestone” instead of the famous “monolith” was jutting out of the ground, getting the attention of the China National Space Administration (CNSA).

The rock was observed near a crater. The rock may be the result of an impact event, photos from the CNSA suggest.

The image that got the CNSA’s interest depicts a curious rock standing alone against a smooth background.

The following day they took a closer analysis of the rock, which may present clues to its origins and formation.

The shard-like shape hints that the rock is young in terms of geological parameters, considering that it hasn’t been worn down and rounded, like the rounded stones you can find on a beach.

“It seems to have a shard-like shape and is sticking out of the ground. That’s definitely unusual […] Repeated impacts, stresses from thermal cycling, and other forms of weathering on the lunar surface would all tend to break down rocks into more-or-less ‘spherical’ shapes, given enough time.”

He believes that the rock was probably ejected due to an impact, probably from a nearby crater.

The team uses the rover’s Visible and Near-infrared Imaging Spectrometer technology to analyze the lunar rock further. The device can detect light that is scattered off the rock, to figure out its chemical makeup.

In the past, the tool was used to analyze the “gel-like” matter that was discovered on the Moon’s surface in 2019. The substance appeared to be similar to samples obtained by the Apollo 17 mission in 1972.

Their official description sounds like this: “dark, broken fragments of minerals cemented together and black, shiny glass”.

Extra analysis suggests that it was likely rock that got melted together during an impact event.