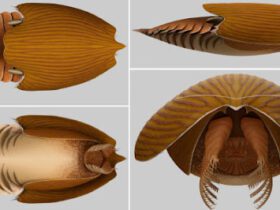 Researchers Discover Giant Animal From Half A Billion Years Ago

Prosser seemed very confident on the assumption, though he didn’t provide any additional information on why that is.

The conference is less than two weeks away, and we can’t wait to see what Apple has got in store for us.

No other sources confirm the rumour, but other leaks from seemingly reputable sources like Bloomberg’s Mark Gurman and Ming-Chi Kuo, the Apple analyst, hinted at a likely mid-year launch or at least in the second half of this year.

However, as Apple presented the WWDC keynote with a June 7, 10 a.m. PT alongside an image of three cartoon characters using MacBooks, numerous individuals are guessing that the conference will meet them with some significant MacBook news.

The three memojis seem to be paying attention to MacBook screens, and their eyes and glasses reflecting lines of code, iMessage, and Apple calendar. That may be a hint regarding the significant changes to underlying code in macOS, possibly making MacBooks use more of the Apple M1 chipset.

Recent rumours spoke about possible 14-inch and 16-inch Macbook Pro devices. Also, it’s believed that the future generation of MacBook pro will go through a considerable redesign and include an enhanced 10-core Apple M2 chip packet with up to 12 high-spec cores and four energy-saving cores, plus 16 or 32-core GPUs and up to 64GB of RAM.

Many people are also expecting an introduction of more colour options, similar to what we saw on the new MacBook Pro models.