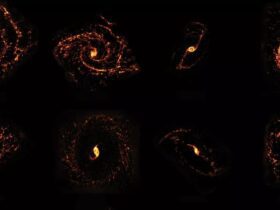 Over 100,000 Stellar Nurseries Have Been Discovered!

Scientists have long believed that space could help form storm-like conditions above our planet, but now they have a photo of what researchers called a plasma space hurricane.

The authors of a new paper recently posted in Nature Communications (https://www.eurekalert.org/pub_releases/2021-03/uor-sho030221.php) claim that they have the first observations of a swirling mass of plasma above the North Pole, in the shape of a hurricane.

The teams from the University of Reading and Shandong University managed to create a 3D image of the 1,000 km-wide mass that pours electrons instead of water, thanks to satellite imagery in 2014.

The space storms above our planet are the result of solar wind smacking into Earth’s atmosphere.

Professor Mike Lockwood, a space scientist from the University of Reading, stated:

“Tropical storms are associated with huge amounts of energy, and these space hurricanes must be created by unusually large and rapid transfer of solar wind energy and charged particles into the Earth’s upper atmosphere.”

Lockwood and his colleagues think that space hurricanes may also occur beyond our solar system.

The discovery is remarkable because hurricanes were also detected in the lower atmospheres of Mars, Jupiter and Saturn. Still, it is a premiere to see space hurricanes in the upper atmosphere of planets.

Hurricanes happen in Earth’s oceans over warm bodies of water. However, in the upper atmosphere, solar wind is the main reason why space hurricanes occur.

Solar winds are streams of charged particles from the sun’s atmosphere.

Those particles travel everywhere and interact with all matter they encounter. Thankfully, our planet’s magnetosphere shields us from them.