NASA’s Juno enrolled five years ago in what seemed to be one of the most daring space missions ever planned. Since then, the bold spacecraft found its perfect place, in orbit around Jupiter.

Now, we have some newly processed snapshots of our planet that’ll totally leave you speechless.Â

Curious to see them?

Earth in All Its Glory

Thanks to Kevin Gill, a very talented image editor, we can enjoy some of the best shots of our planet captured by the JunoCam, also known as the “citizen science” camera. Check out the above picture!

Back in 2013, Juno got a boost in speed of over 3.9 kilometers/s and flew over its home. Scientists seized the opportunity and tested the spacecraft’s camera, shooting several pictures of Earth.

As previously mentioned, JunoCam was developed as a joint project between the public and mission scientists. Such a thing allows the general public to download photos shot by Juno for subsequent image processing.

“The idea that you can couple our scientific imaging and understanding of the planet, with artistic representations of not only what the planet means but what exploration means, has been very valuable to the mission – and to the public,” explains Paul Steffes, one of the Juno science investigators.Â

Below you can see one of the newly processed images of our planet: 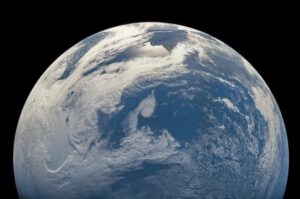 As you can notice, Earth’s captured details are incredibly breathtaking. This image is by far one of the most representative shots of our planet.

You can also check out the first photos of Jupiter’s moon, Ganymede, captured by Juno, here.

NASA launched Juno back in 2011, on 5 August, from the Kennedy Space Center in Florida. According to Juno’s engineers, the spacecraft’s launch vehicle could supply Juno with enough energy, only to reach the asteroid belt. Later, the probe was pulled back toward the inner solar system by the Sun’s gravity.Â

You can see more of Kevin’s fantastic work here.