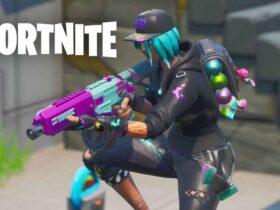 Fortnite 23.20 update will air soon, bringing new skins, quests, a sleek collab, and more yet to be discovered. The latest Fortnite update comes in handy, considering that a month has passed since the last one!

Curious about the Fortnite 23.30 update? We’ve come up with a cool guide on everything you need to know, including the stuff we might get.

Also, details about how long we’ll have to wait for the downtime to be over are still unknown. Based on the previous ones, it should take one hour or two.

Get ready for more skins and quests soon! Fortnite 23.20 update is said to introduce a bunch of sleek skins, including Midseason Drop styles for Dusty and Doom Slayer. You’ll be able to unlock all of that by completing various challenges.

We might also have a Family Guy collab (fingers crossed), as discussed here.

As for the new quests, there will also be more weekly ones, so you’ll get even more XP for your Battle Pass!

A Fortnite X Dead Space collaboration will be released in January, according to @InsiderGamingIG!

In their article, they have also talked about the possible release date and other small details, if you're curious: https://t.co/Poxp3GQUa5 pic.twitter.com/RfqZmmNVe7

Wouldn’t that be impressive?!

The Kid LAROI has been rumored to make an appearance in Fortnite towards the end of January. As reported by @HYPEX, the Australian rapper and singer’s concert might air on January 24 or 25.

The following bug fixes are expected to be added: