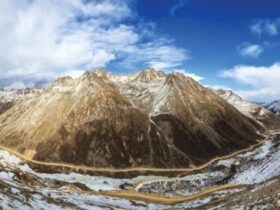 The Tibetan Plateau Will Experience Warmer Temperatures – What to Expect

Say what you want about the ‘Dragon Ball Super: Super Hero’ movie that came out last year, but we all have to admit that it represents a great source of inspiration for those who add fighters and different transformations to the roster of video games. After we found out the information that Gamma 2, one of the androids and villains of the movie, will appear in the Dragon Ball Xenoverse 2 fighting game, it’s now time for another major addition to the roster of fighters.

Orange Piccolo represents the most powerful form of the famous Namekian from Dragon Ball, and it will be available in Xenoverse 2 as part of the Hero of Justice DLC Pack 2. The information comes from an official source, which means that being skeptical doesn’t make any sense.

Here’s a part of the official announcement so that we can get a better idea of what exactly the future addition will mean:

Orange Piccolo is coming to Xenoverse 2 and he’ll have a plethora of attacks based on his memorable and epic battles against Gamma 2 and the gargantuan Cell Max from the movie Dragon Ball Super: SUPER HERO.
He has one devastating Ultimate Attack and two Super Attacks that you can read more about in V Jump’s super-sized March edition, which goes on sale in Japan on Friday, January 20!

There seems to be no precise release date announced for the arrival of Orange Piccolo in the game, but we do know that the addition is happening this year!

Piccolo might have never been as strong as Goku, Vegeta, or adult Gohan, but the Namekian still has some devastating and unique abilities that make him stand out in times of desperation. Piccolo can increase its size and become giant, stretch his arms tremendously, regenerate his body after a serious wound, use the deadly Special Beam Cannon, and more. He’s easily one of the most important characters in Dragon Ball.