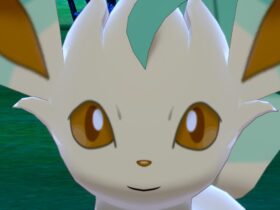 Epic Games has big plans for this spring, including a new Easter-themed event featuring some of the craziest skins so far and cool rewards.

Spring Breakout will air this week and will add some extra fun along with some intriguing changes. The event will also bring back the beloved Egg Launcher weapon and other stuff in the Shop.

Epic Games hints at a major spring event ready to challenge us! The Spring Breakout will kick on March 30 and wrap up on April 7, as per the devs’ official post on Twitter. 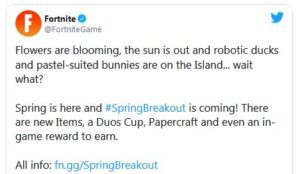 So, make sure you update your game to version 16.10 and enjoy all the goodies! 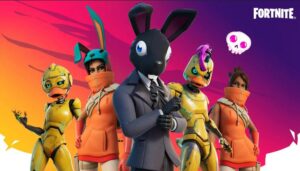 The event will add some of the craziest skins seen so far in Fortnite. Some of them are brand-new, while others return from previous seasons (how cool is this?).

You can get your hands on the Rabbit Raider, Webster, Bunny Brawler, and Quackling. The names for the two of them are still unknown, but we should get more details soon.

Get Webster now for free

Join now the brand-new Spring Breakout Cup and get Webster for free!Â

All the players who win will be rewarded with the new skin earlier. The tournament will be Duos and will air on April 2.Â

Tactical Quaxes Pickaxe: how to get it

Fortnite is offering a new pickaxe for all players who complete the upcoming in-game challenges.Â

Stay tuned to find out everything about the new challenges!

The Egg Launcher is Back!

The Easter-themed praised Egg Launcher will return during the Spring Breakout event. Information about how to find it is still scarce.Â

Previously, the Egg Launcher spawned inside chests or as ground loot.Â

Make sure to update your game and join the new adventure!