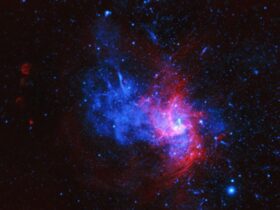 Giant Star Detected Near Milky Way’s Center is Quite Peculiar

We’re counting the days until FIFA 22 will be released for PlayStation 4, PlayStation 5, Xbox Series X/Series S, Xbox One, Nintendo Switch, Google Stadia, and Windows PC. The world’s most popular football simulation series will be back in business with a brand new iteration, as it happens every year.

FIFA 22 launches on September 26, and we already have plenty of trailers for igniting our imagination and give us a good idea of what we’ll see in the game. Every year, so many talented footballers are standing out, both young and veterans.

There’s a new trailer published by IGN on YouTube telling us a lot about the players’ ratings, and you can’t afford to miss it if you’re a FIFA fan:

We’re excited to see so many transfers from the real world being introduced into the game. It was an incredible season for the transfer market this summer. Ronaldo came back to Manchester United after 12 years, Messi left Barcelona for PSG, Lukaku went to Chelsea, Sancho and Varane joined Manchester United, Antoine Griezzman was transferred to Atletico Madrid, and the examples could continue.

However, we don’t know how well Ronaldo’s transfer to Manchester United will go for the Portuguese superstar. He has been recently downgraded by EA compared to the previous season. Ronaldo is only the third-best footballer in the world. The second place has been taken by Robert Lewandowski, the scoring machine from Bayern Munchen. As for who takes the first place, you have already guessed his name: Leo Messi. The young French striker Kylian Mbappé also has an honorable 91 overall, and we expect him to grow a lot more in the following years. Mbappé is only 22 years old.

What do you think about what’s coming up in FIFA 22? Feel free to comment!