Neutron stars and black holes might be one of the deadliest squads we’ve ever seen. Small black holes could exist in the core of neutron stars with only one mission: devour the host.

Astronomers have chosen recently a different approach, including the way a small black hole would devour a neutron star from within. They calculated how long this process would take and what could be the consequences.

A team of physicists from the University of Illinois at Urbana-Champaign and the Bowdoin College published quite the paper. They performed a series of tests including the measurement of an accretion rate (the rate at which a black hole would eat a neutron star). What they found is genuinely intriguing.

According to previous calculations, neutron stars are approximately 2.3 times bigger than the Sun. On the other hand, black holes are more like the size of dwarf planets. 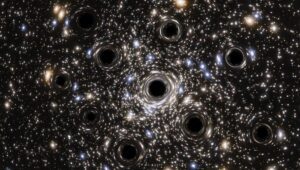 Physicists calculated what could happen if the black holes are 10 times smaller than the Sun. Apparently, the neutron stars wouldn’t stand a chance.

Such a thing indicates that the most ancient black holes had definitely devoured their host neutron stars, as they were more mighty. The team released a statement, discussing the importance of the new approach:

“[…] our results corroborate arguments that use the current existence of neutron star populations to constrain either the contribution of primordial black holes to the dark matter content of the Universe, or […] may form black holes at the center of neutron stars after they have been captured.”

The recent paper surely comes with significant new data about small black holes. And if there are globs of dark matter particles somewhere out there flying in the Universe, the situation is intriguing.

They could end up in black holes that would later convert neutron stars into black holes. How great is this?