Watch Trailer for ‘Kirby and the Forgotten Land’

China is gearing up to send the first core module for its first permanent space station. Plans for the big launch event are now in development, and we might see it happen shortly this week.

Starting with an ambitious idea, the Chinese space agency is getting closer to its main goal: a space station. Launching the first core module, dubbed Tianhe, or “Heavenly Harmony,” is only the first part of the project. Other 10 missions are awaiting.

Heavenly Harmony will pave China’s way to space this week when it will be hurtled into space aboard rocket Long March 5B. The event will take place at the Wenchang Launch Center. If all goes well, we might see Heavenly Harmony leave by the end of the week. 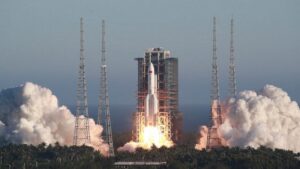 Another 10 missions await to launch two more modules, four cargo supply shipments, and finally four missions with crews. Currently, there are 12 astronauts training for the space station, including women, some veterans of previous flights, and of course, newcomers.

China stated Tianhe would reach its full potential by 2022, which is quite a short timeline if we consider how much work the space agency has to do.

When completed, the Chinese space station will weigh approximately 66 tons (compared to the ISS, just a fraction size). Tianhe will include a docking port and will be permanently connected with a mighty Chinese space satellite.

Previous Attempt and the ISS Collab

China has sent over the last decade two experimental modules for a permanent space station. First, there was Tiangong-1 (Heavenly Palace-1), and as ambitious as it seemed, it was a colossal failure. It burned up during an uncontrolled loss of orbit.

The second, Tiangong-2, was luckier, and back in 2018, it was successfully taken out of orbit.

Before China started all of that, it was part of the ISS in the early 1990s. However, due to US objections over the Chinese program’s close military ties and secretive nature, it all ended with China being excluded.