As a new study emerges, we learn the truth about discovering Antarctica, and things are not as complicated as previously believed.

A team of researchers from New Zealand are finally shedding some light on a century-long question: who was first on Antarctica? Their study brings intriguing new details and a story worth passing on.

Not Your Usual Explorers

History depicts Polynesian seafarers as one of the greatest sailors, navigating vast lengths between Pacific islands with pinpoint accuracy on their canoes or double-hulled waka. Their journeys are incredible life stories that we can finally tell again thanks to a bold team of researchers. 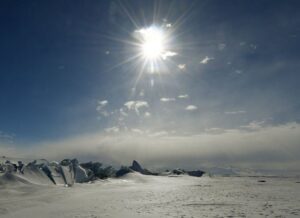 Researchers needed to investigate the so-called “grey literature,” historical indigenous artworks, oral records, and even non-academic sources to find any links between Antarctica and Maori people.

“We found connection to Antarctica and its waters (has) been occuring since the earliest traditional voyaging, and later through participation in European-led voyaging and exploration, contemporary scientific research, fishing, and more, for centuries,” explains Priscilla Wehi, the project leader.Â

So, it’s true: Polynesian seafarers discovered Antarctica long before the first Westerners in the 1820s. Such a thing is genuinely intriguing and, for some, maybe even life-changing.

As per the new findings, the first voyage to Antarctica water even pre-dates Maori arrival in New Zealand back in the 14th century.Â

Researchers highlight some oral histories of the explorations that include reference to “a foggy, misty and dark place not seen by the sun,” and some daring iceberg-like summits “piercing the sky with no vegetation.”

Putting everything together sure comes with a more sense of reality. We can know now that there’s an extensive history of connection to Antarctica and Polynesian seafarers, which is one of the most beautiful things.