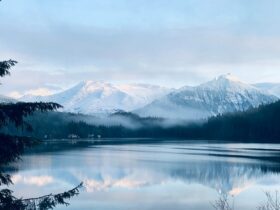 Alaska Inhabitants Are Speechless After UFO Appears on the Sky

There has been a seven-month gap between the second and third season of the series, and fans are hoping that a new season is right around the corner.

However, the chances are that the wait may be increased for this time.

As Netflix dropped the third season, fans of the series have been aching for an announcement of a fourth season.

Still, Netflix hasn’t yet confirmed that Virgin River has been renewed, so nothing is official regarding a future season.

Therefore, the official release date of the supposed upcoming season is not known yet.

However, that shouldn’t be a concern as Netflix normally waits for a few months before confirming the release of a new season to a series.

There is some concern among fans because of the fact that the third season was launched nearly three months ago, and it should be about time we get some form of an official announcement.

Still, you should remain calm, as it is very likely that Netflix will soon announce that the series has been renewed for a new season.

There are many reasons to believe that the series will get a renewal.

In case you didn’t know, at launch, the third season quickly became one of the most-watched titles on Netflix and gaining the title of an all-time most popular name.

Virgin River is based on Robyn Carr’s original novels, which spawned 22 installments.

Most of the story is omitted by Netflix, unfortunately, but there is a silver lining to that – There is tons of plot left to cover, an extra reason to keep your hopes up for a new installment to the series!