InSight has previously reported other quakes in the same region. This time around, however, the seismic activity was low. Scientists explain how the earthquakes influenced the Martian ground and what we should expect up next from the InSight lander.

Examining marsquakes is just one way closer to understand better Mars’ core and mantle. The Red Planet doesn’t have tectonic plates as our planet does. Instead of that, it has volcanically active areas that can cause some tremblings.

The InSight lander reported two new marsquakes with magnitudes of 3.6 and 3.1. Previous data show that the lander has recorded over 500 quakes, but not all of them emitted a precise signal.

How different are marsquakes from earthquakes?

According to scientists, earthquakes waves can move more directly through our planet, while those of moonquakes, for instance, are more dispersed. Marsquakes, however, are somewhere in between. But all the four quakes recorded on Mars are very Earth-like. 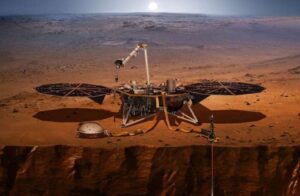 Such temperatures variations could be troubling, triggering the cable connecting the lander’s seismometer to contract and expand. That results in spikes in data and popping sounds.

So, NASA has started to insulate the cable from the weather partially. How it does that?

Scientists have begun by utilizing the scoop on the end of the lander’s robotic arm to drop soil on top of the domes Thermal Shield and Wind. Such a technique allows the soil to be closer to the shield a lot without disturbing the shield’s seal with the ground.

Burying the seismic rope is actually one of the next phases of the mission, which NASA recently prolonged by another two years. We should expect even more precise data by December 2022!