A compact cluster of stars holds a surprise at its core, leaving astronomers in awe. Apparently, a bunch of stars and black holes can get well without a problem.

The clump of stars in question, dubbed NGC 6397, is filled with small black holes. This discovery is indeed very fascinating, and astronomers believe that it could help us better understand the development of bigger black holes.Â

Why Is This Cluster of Stars so Special?

Globular clumps of stars are also known as “fossils” of the ancient Universe. They have a thick composition and can hold up to 100,000 to 1 million old stars.Â

According to astronomers, the chances NGC 6397 to be as old as the Universe, are very high. The Milky Way hosts over 150 known globular clusters.Â 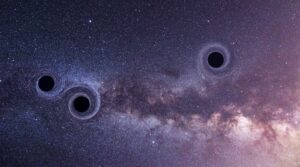 The bundle of stars is not only a fascinating looking thing. Astronomers believe these stars are great tools for investigating the history of the Universe, for instance, or the dark matter of the galaxies they orbit. But that’s not everything these stars have to offer.

A team of astronomers have been examing the globular clusters more profoundly, spotting some intermediate-mass black holes.

The black holes are between stellar-mass and supermassive black holes (usually found at the galaxies’ cores).Â

Eduardo Vitral is an astronomer at the Paris Institute of Astrophysics in France. He released a statement:

“We found very strong evidence for an invisible mass in the dense core of the globular cluster, […] but we were surprised to find that this extra mass is […] extended to a few per cent of the size of the cluster.”

What will happen with the small black holes

Astronomers believe that the small black holes will eventually end up towards the cluster’s core. They will also start to whirl into each other and merge.Â

After a time, we’re going to witness the birth of an intermediate-mass black hole.