The roof of the world will soon feel warmer than usual. New research explains how much warmer temperatures will transform the Tibetan Plateau.

The warming process of the Tibetan Plateau has been observed since the 1960s. According to researchers, human activities, greenhouse gas emissions, and other factors are to blame. What will happen to the Tibetan Plateau in the future? New data indicates shocking results.

Warmer Temperatures Where To

A team of researchers used a series of techniques and CMIP5 (an archive of climate models) to untangle and quantify the relative contributions of various external factors in the observed warming. The findings are genuinely intriguing.

Tianjun Zhou is part of the team and a senior scientist at IAP and CAS Center for Excellence in Tibetan Plateau Earth Sciences in the Chinese Academy of Sciences. He released a statement discussing the techniques used to predict the Tibetan Plateau’s future.

“A clear understanding of the past warming of the Tibetan Plateau, particularly the underlying human influence, can help better anticipating and interpreting future changes.”

The team utilized an attribution analysis and an optimal fingerprinting detection to show that human influence is to blame for the warming of the Tibetan Plateau. The results indicate temperatures warm with 1.23 degrees Celsius over 1961-2015 due to people’s influence, and around 1.37 degrees Celsius due to greenhouse gases. You can see the graphic below: 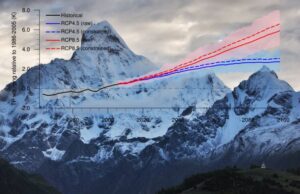 The attribution analysis shows that the CMIP5 ensemble might be wrong when it comes to the anthropogenic warming trend on the roof of the world. Such a thing is truly disappointing.

Such predictions indicate a colossal loss of glacier mass and further raised geohazard risks in the Asian water tower.