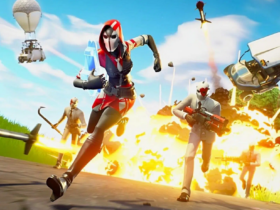 How to Tactical Sprint in Fortnite Chapter 3 Season 2

Almost eight years have passed since the release of GTA V, and rumors along with speculations about how GTA VI will and will not be, are flooding the internet. The sixth main instalment of the legendary Grand Theft Auto series should be announced by Rockstar any time now, and arming ourselves with some patience remains the only option.

If we take a look back in the GTA history, pretty much every game showcased the world of the time when those games themselves went out. GTA San Andreas showed the period of mobile phones the size of bricks and with antennas mounted on them, GTA 4 brought the protagonist Niko Bellic into the world of internet cafes and mobile phones with polyphonic ringtones, while GTA V presented a more familiar environment to many of us, where smartphones with touchscreens were in everybody’s hands. If the new rumor is true, the GTA 6 characters will dive deeper than expected into our current world.

Comicbook.com writes that according to Tom Henderson, who is a reliable industry leaker and insider, the upcoming major GTA game will implement cryptocurrency along with the possibility of dishing it out to players for completing missions. Henderson declared:

I heard recently that in GTA 6, some missions will reward you in bitcoin instead of cash for completing some missions.

The stock market feature will return, with the addition of a broker for different cryptocurrencies. If GTA 6 incorporates this right, it’s huge for crypto. Just so there’s no confusion, I mean in-game payments of bitcoin. These payments will come from the more higher-up characters that need to transfer high amounts of'”untraceable cash and fast’. Just so there’s even less confusion – I’m not joking. This is what I heard from someone that I trust and it will likely not be called ‘Bitcoin’ per se – But it will be a cryptocurrency.

With or without cryptocurrency, the developers will surely have massive work to do with GTA 6 to ensure that the game will ever compete with its predecessor GTA 5.