The Pandemic May End Soon, According To Moderna

Realme is getting ready to launch a new Narzo smartphone, the Realme Narzo 30. The smartphone will join the Narzo lineup alongside Narzo 30A and the 30 Pro variants.

Realme Narzo 30 will debut next week, and while the company didn’t reveal much information about it, fresh leaks hint at the phone’s specs and features.

The new Realme offering will sport a 6.5-inch IPS LCD panel with a 90Hz refresh rate and a sleek punch-hole cutout for the selfie camera.

Under the hood, Narzo 30 will draw its power from a powerful MediaTek Helio chipset coupled with 4GB RAM and 128GB onboard storage. Other storage and RAM versions could also be launched. 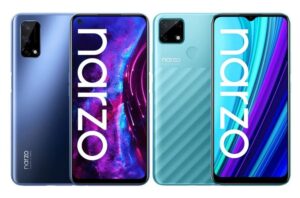 Coming to camera capabilities, Realme Narzo 30 is believed to flaunt a 48MP main sensor, including a 2MP macro sensor and a 2MP depth sensor.

Upfront, a camera of 16MP is said to capture the best selfies and video calls.

As per the Realme Malaysia Facebook page, the Realme Narzo 30 is expected to pack a 5,000mAh battery with a 30W wired fast charging tech support.

Rumour has it, the phone will take only 25 minutes to charge the battery from 0 to 50 %.

Unfortunately, Realme didn’t reveal anything about the Realme Narzo 30’s price tag. However, we can expect the smartphone to fall in the mid-range segment, so a price of around $270 would be totally fair.

More details, including the phone’s availability, will be available next week! Realme Narzo 30 will launch on May 18.

Stay tuned for more details about the new Realme Narzo 30!