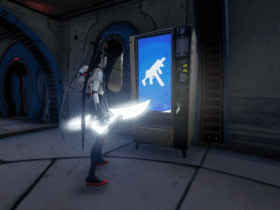 Fortnite: Where to Find Vending Machines in Season 2

Mars might not be yet a suitable destination for humans, but it’s still safe to send some robots there. NASA’s Perseverance rover has been bringing important data from the Red Planet since 2021, and now it captures a solar eclipse from the controversial space object.

As you already know, Mars doesn’t have the same moon as Earth does. There are two natural satellites revolving around our neighboring planet: Deimos and Phobos. NASA has now spotted the latter as it passes in front of the Sun.

Filming the eclipse was possible due to the Mastcam-Z camera mounted on the Perseverance Mars rover.

The Jet Propulsion Laboratory of NASA released the following explanation via its YouTube channel:

NASA’s Perseverance Mars rover used its Mastcam-Z camera system to shoot video of Phobos, one of Mars’ two moons, eclipsing the Sun. It’s the most zoomed-in, highest frame-rate observation of a Phobos solar eclipse ever taken from the Martian surface.

The same source tells us that in the last 18 years, a few rovers have captured the Phobos moon as it passes in front of the Sun. It all began in 2004, along with the observations made by Spirit and Opportunity.

Mars is far from being just another planet in our Solar System. It’s the ONLY other planet in the Solar System where some forms of life could exist. There’s no wonder why Elon Musk and many astronomers hope to send humans there one day.

Elon Musk even believes that in the future, pretty much anyone could be able to afford a ticket to Mars that should be provided by SpaceX. The famous billionaire made the claim during an interview for TED, adding that such a ticket would cost $100,000.

Whether humanity will afford a ticket to Mars in the future or not, it seems only a matter of time until an astronaut will land there.