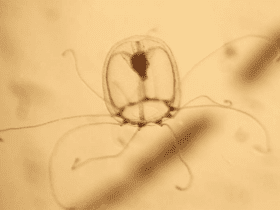 Vampire Jellyfish Leads Quite the Life At the Bottom of the Sea, According to a Study

The game’s trailer from The Game Awards 2020 showed the return of Liara T’Soni, one of the franchise’s most popular characters.

Some believe that Sheperd may also make a comeback, as Liara appears to wear a part of Shepard’s N7 armour in a snowy landscape.

However, if you hope to see other companions like Garrus, Tali, Jack, Miranda, or others return, you will undoubtedly be disappointed.

There is solid proof about that aspect, and it appears that nearly all of the initial trilogy companions won’t be making a comeback.

At the beginning of the trailer, a shot of the Milky Way and Andromeda, which the game’s project director Michael Gamble announced, was “intentional.”

That suggests that Mass Effect 4 will possibly deal with the cliffhangers of Andromeda and the original trilogy alike, but the Andromeda project didn’t reach the next galaxy until 600 years after Mass Effect 3.

Asari can live to a thousand years old, which is the main reason why Liara will still be around during that time.

At the beginning of the first game, she is still young for an Asari at only 106 years old.

She could possibly live some extra nine centuries, making her the perfect returning character for the upcoming title, especially as numerous fans are eager to see her again.

Unfortunately, Shepard’s survival isn’t confirmed, but there is a chance that he is still alive thanks to the effects of the Lazarus Project or the Crucible, which may have preserved him for long enough.