The Arctic is now experiencing the worst-case scenario after new research highlights the danger the sea ice is currently facing. According to a team of UCL researchers, the sea ice in the coastal regions of the Arctic is thinning faster than expected.

The thickness of sea ice can indicate the Arctic’s health. If things continue to worsen, we might witness a huge loss.

Losing Ice and Fighting With the Unknown

In the new research, the team exchanged a map of snow depth in the Arctic that is decades old and doesn’t account for climate change for the results of a new computer model.

The researchers found that the sea ice in important coastal areas was thinning at a rate of 70 % to 100 % faster than previously believed.

“Our calculations account for this declining snow depth for the first time, and suggest the sea ice is thinning faster than we thought,” explained Robbie Mallett, the Ph. D. student who led the research. 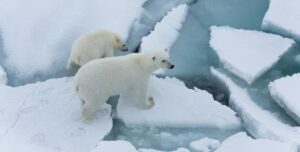 The team measured the sea ice thickness using the CryoSat-2 satellite from the ESA and a new snow model dubbed SnowModel-LG, previously designed by researchers at the Colorado State University and the UCL.

Furthermore, they combined the results with the satellite data with the snow model to estimate the overall rate of decline of the Arctic’s sea ice thickness and its variability from year to year. What they found is genuinely intriguing yet shocking.

The variability in sea ice thickness raised by 58 % from year to year all over the seven coastal seas.

The ice thinning is not only about losing ice. The researchers discussed what we could also lose. Both the extraction of resources from the seafloor, such as gas, minerals, and oil and the shipping along the Northern Sea Route will have to suffer.

China Aims to Establish a Human Base on Mars

Up to 10,000 Years of Climate Memory Stuck in the Alps, New Study Finds

The CDC Warns About Another Respiratory Illness That Starts to Spread

How to Overcome Sleeping Disorder – Behold Our Best Tips

China Aims to Establish a Human Base on Mars

Up to 10,000 Years of Climate Memory Stuck in the Alps, New Study Finds