The Developers Pull the Grand Theft Auto Trilogy on PC

As the molten metals in Earth’s outer core transits, our planet is shielded from possibly critical space weather by a vast magnetic field. But this magnetic field’s structure has varied a lot so far.

Previous research shows that the field might be approximated precisely by the GAD field (the geocentric axial dipole). Now, new data comes with more proof, suggesting that the GAD approximation doesn’t really indicate the intensity of the paleomagnetic field over the last 5 million years.Â

The paleomagnetic field’s intensity and direction from a given period in Earth’s history can be unearthed in magnetic particles in some rocks from that time.

The recent research suggests that rocks in Antarctica might unveil a lower intensity than the GAD. What does this mean?

A team of researchers reexamined previous data and gathered new samples from lava streams near Antarctica’s Erebus Volcanic area. The goal was to figure out if those low intensities represent the paleomagnetic precisely.

Next, the team examined the magnetic traits of the samples to get more data. The results are promising. 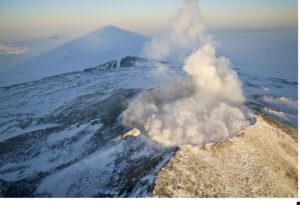 The new investigation offered estimates for directional features of the paleomagnetic entries that match the GAD basis.Â

Unfortunately, the estimates of field intensity were lower than anticipated. Why so?

According to researchers, a possible reason could be the paleomagnetic field’s medium intensity from the last 5 million years. Apparently, it was lower than the more recent geomagnetic field.Â

Also, there’s a chance that the field might have brought powerful variations from a GAD field structure.

Even if the recent research doesn’t seem to bring enough data, the team intends to examine paleodirections and paleointensity from more latitudes over the last 5 million years.Â

The upcoming insights could enhance reconstructions of our planet’s paleomagnetic past. It might also offer essential details about future changes to Earth’s magnetic field.