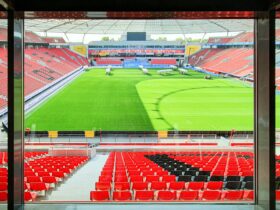 Eminem refused an offer to perform with 50 Cent at the 2022 World Cup and turned down a million dollars.

For years, the choice of Qatar to host the most-watched sporting event on the planet, the FIFA World Cup, was denounced. The host country had to put on quite a show with some of the most recognized artists, but some of them rejected the invitation.

Read down below the causes why Eminem rejected the invitation.

The Rapper Refused To Appear In Qatar

According to an interview with Big Boy’s Neighborhood, 50 Cent said that he and Eminem were offered $9 million to perform at the 2022 World Cup. Meanwhile, Slim Shady did not want to do it.

There are speculations that Eminem refused because of the systematic discrimination against women and the reported deaths of several migrant workers who contributed to building the stadiums where the games were held.

50 Cent talked with Eminem’s manager, Paul Rosenberg, about this offer, and he instantly turned it down, saying short and to the point: ‘He’s not gonna do it.’

The money would have been shared 1 million to 50 Cent and 8 million to Eminem.

Have Other Artists rejected To Appear In Qatar?

Rod Steward rejected the offer and explained why.

I rejected it. It’s not okay to go. And the Iranians should also be out for supplying weapons.

There were rumors that Dua Lipa would perform at this year’s World Cup, but the singer clarified that she never negotiated to perform.

Dua Lipa clears rumors about performing at the opening ceremony of the World Cup in Qatar.

‘I will not be performing & nor have I ever been involved in any negotiation to perform […] I look forward to visiting Qatar when it has fullfilled all the human rights pledges it made’ pic.twitter.com/Ca7DA9H1bC

The last artist is Shakira, who was also expected to participate and do a song. Still, according to the sources, the Columbian woman informed that she would not attend the inauguration or other parts of the competition.

Stay tuned if you want to know the latest news about your favorite rappers!