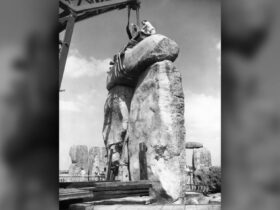 1958 Stonehenge Rock Fragment Reveals The True Age Of The Monument

The world of Chinese smartphone manufacturers doesn’t end with Xiaomi and Oppo. Honor is another brand that has some interesting things to prove, and one strong argument is the recent launch of the Honor 80, Honor 80 Pro, and Honor 80 SE smartphones.

Two of the three new smartphones, meaning the standard Honor 80 and the Honor 80 Pro models, are equipped with main cameras of 160MP each, according to GSMArena. As you might have already guessed, the Honor 80 SE represents the weakest device from the trio, but it still has some impressive specs otherwise. The main camera of the SE version of the lineup reaches only 64MP.

It would be absurd to add a powerful camera on a smartphone that doesn’t also feature a display that can compete, right? Honor seems to know that lesson very well. Honor 80 Pro carries a huge 6.78 inches OLED display that has a refresh rate of 120Hz. There are two cameras mounted on display: one that reaches 50MP and a depth lens of 2MP.

The standard Honor 80 model features a slightly smaller OLED display – one that measures 6.67 inches. It also reaches the same refresh rate of 120Hz. The selfie camera integrated into the display is also less impressive than what the Pro version is capable of, as it reaches 32MP.

The processor of the standard Honor 80 is represented by the new Snapdragon 782G chipset.