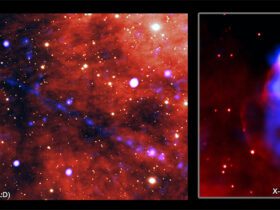 Pulsar Leaves Behind A Trail Of Matter And Antimatter

Halloween is just around the corner, and reality can be a lot more frightening than any horror movie. A new audio recording of a solar storm colliding with the magnetic field of our planet can definitely prove it.

The recording is the outcome of data gathered by three Swarm satellites of the European Space Agency (ESA). Scientists from the Technical University of Denmark collaborated to convert the data into sound.

Feel free to listen to the recording:

Klaus Nielsen from the Technical University of Denmark, who’s also a supporter of the project, explained as Engadget quotes:

The team used data from ESA’s Swarm satellites, as well as other sources, and used these magnetic signals to manipulate and control a sonic representation of the core field. The project has certainly been a rewarding exercise in bringing art and science together,

The rumbling of Earth’s magnetic field is accompanied by a representation of a geomagnetic storm that resulted from a solar flare on November 3rd, 2011, and indeed it sounds pretty scary.

Both coronal mass ejections and solar flares can be considered solar storms. These phenomena occur from time to time, and it confirms that the Sun is not always very friendly toward us. You may have also guessed that from the fact that it inflicts skin cancer on many during prolonged exposure to ultraviolet light.

What’s interesting is that this isn’t the first time scientists have shown us how frightening the Universe can sound, literally speaking. Back in August, NASA revealed the terrifying sounds of a black hole, meaning the most mysterious type of cosmic object in the Universe.

Without the magnetic field, Earth wouldn’t be capable of hosting life as we know it. The explanation is simple: the magnetic field acts as a protective layer against cosmic radiation that could otherwise blow our entire atmosphere away.