Lucy is the upcoming mission NASA is going to unfold in space soon! The spacecraft will enrol in the 13th mission of the space agency’s Discovery Program that aims to operate closer to the Sun.

Recently, Lucy has completed the final step in verifying the thermal vacuum of both its solar panels. This step was essential before the big launch. Now, NASA is getting ready for one of the most ambitious solar-powered space missions ever.

Lucy to the Sun and Beyond

NASA’s Lucy spacecraft will soon be fully operational and ready to start its mission. The spacecraft’s solar panels are now attached and extended, reaching a height of about a five-story building.

The solar arrays, developed at Northrop Grumman, California, will generate power for Lucy and its tools efficiently. According to NASA engineers, the solar panels will need to supply approximately 500 watts, similar to the energy a washing machine needs.

However, even if the required energy is not that high, the panels must be considerably large to work accurately far from the Sun. They hit a dimension of 10cm (4 inches) when folded and around 7.3 meters (24 feet) when expanded. One intriguing aspect is that the panels can’t support their weight of 77kg (170 pounds) here on Earth.

A special offload device inside the chamber will carry everything.Â 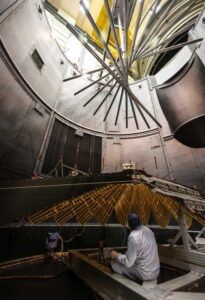 “Lucy will travel farther from the Sun than any previous solar-powered Discovery-class mission, and one reason we can do that is the technology in these solar arrays.”

Lucy represents the 13th mission of NASA’s Discovery Program. During its 12-year grande tour of the Trojan asteroids, the spacecraft will run a high record-breaking of 853 million km (530 million miles) from the Sun, beyond Jupiter’s orbit.Â