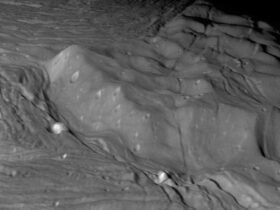 Top Geological Features Outside Our Planet

In a first-of-its-kind test to safeguard our planet, a spectacular asteroid collision rammed a NASA probe into a space rock. The impact proved more powerful and effective than experts had anticipated.

On September 24, the Double Asteroid Redirection Test, aka DART, spacecraft collided with the tiny asteroid Dimorphos. Although NASA is unaware of any imminent dangers, the mission was intended to test a potential planetary defense strategy in the event that a massive space rock ever threatens to collide with Earth.

Read out below for all the intriguing details!

Launched in November 2021, the DART spacecraft carried a single sensor and cost approximately $314 million. It weighed around 360kg (800 pounds). The rest is pure bliss.

On September 26, DART made a dramatic entry into the Solar System. It traveled at 23,760kph (14,760mph) and sent one photograph to Earth every second until it collided with Dimorphos at a distance of 7 million km (11 million miles). Such a thrilling experience isn’t it?!

Scientists received their first perfect look at Dimorphos when DART sent images back to Earth in the final minutes because from our planet, the small moon and the bigger Didymos seem like a single dot in a field of stars.

The photographs first revealed a rock formation resembling an egg, then a field of stones, gravel, and dust. Check out below the post-impact photo:

According to experts, more observations for the mission will continue into the next year. The Hera follow-up mission, which the European Space Agency (ESA) will launch in 2024, will examine Didymos and Dimorphos in considerably greater detail than DART could during its brief stay.