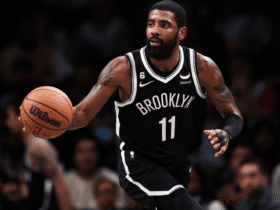 Nike Suspends the Relationship With Kyrie Irving, Canceling the Next Shoe Release

iPhone 14 has already started selling, even though Apple released the flagship only less than two weeks ago. But some of those who have already bought the phone are facing camera issues such as the main lens vibrating uncontrollably during apps like Instagram, TikTok, and Snapchat. iPhone 14 users started to complain about the problem across social apps such as Twitter, TikTok, and others, which make them obtain shaky video recordings, as MacRumors reveals.

Of course, the new technical issue with the iPhone 14’s camera also led to a lot of online jokes and mocks. And regardless of how a great Apple fan you might be, you have to admit that some of them are very funny! “The new dance effect” or “Dynamic Camera” are just two of them.

So @DongleBookPro captured some real gems with the busted 14 Pro Max camera 😳 pic.twitter.com/9mgJ6ua3Un

Interestingly enough, the issue was reported only by those using the Pro and Pro Max versions of the iPhone 14. There’s no indication that the problem exists on the other two versions of Apple’s 2022 flagship, such as the standard iPhone 14 and the iPhone 14 Plus.

No cause identified so far

Although there are plenty of voices complaining on the internet about the camera issue on iPhone 14, nobody can say for sure what the cause of the technical problem is. We can only wait for Apple’s point of view on this situation, which will surely arrive soon. The company will likely provide a fix through a new update if a software bug is what’s causing the issue.

The iPhone 14 mainly stands out for the implementation of Apple’s A16 Bionic chipset for the Pro and Pro Max versions. On the other hand, the standard iPhone 14 and the Plus version are equipped with the same processor that was present on the previous iPhone 13 model: the A15 Bionic chip.