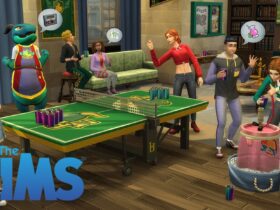 Will The EA Play Event Disappointment Lead To A Sims 5 Announcement?

Perhaps everyone can agree that iPhone 14 Pro Max and Samsung Galaxy S22 Ultra are two of the most powerful phones available on the market. They may actually be the best phones in 2022.

When you choose a smartphone nowadays, one of the first criteria that you should take into account is durability and resistance to water. Let’s face it: we carry these gadgets everywhere with us, which means that it’s not hard to expose them accidentally to factors that can damage their functionality.

Both iPhone 14 Pro Max and Samsung Galaxy S22 Ultra are very durable phones, or at least that’s what Apple and Samsung are telling us. This means that we have to look for some definitive proof! The frame of the iPhone model is made of stainless steel, while that of the Samsung phone consists of armor aluminum.

YouTuber ‘PhoneBuff’ wanted to find out just how durable the two phones are… the hard way!

From a back drop of under 1 and a half meters, the rear glass of both phones was shattered, although the two devices were still working. Apple loses this round, as the iPhone looks worse than the Samsung device. Even one of the camera sensors on the iPhone 14 cracked. However, an iPhone 14 wrapped into a bounce case didn’t show to have any problems falling from 1 and a half meters.

For the face drop from the same distance, the iPhone becomes the winner. The display of the Samsung phone obviously looked more shattered.

Overall, it was shown once again how efficient a bounce case could be while an iPhone was equipped with it.

Apple released all four iPhone 14 models, including the Pro Max version, on September 7. Samsung released its S22 flagship series back in February when the Ultra model came out as well.