Fast radio bursts (FRBs) are some super-intense radio wave pulses from the deep Universe that puzzled astronomers’ work for quite some time. The phenomenon is mysterious yet fascinating, and so far, we couldn’t tell much anything about them.

The recent detection of FRBs, however, might change the situation a bit. And thanks to the Hubble Space Telescope, we may have just the right data to squeeze in some new key details and finally understand how FRBs work.

These super-intense, super-short radio wave pulses are quite the deal in the Universe. So far, we’ve detected around 15 of the thousand or so, but no luck in telling how they might have come into being in the first place.

The Hubble Space Telescope proved once again that it’s the perfect “instrument” for exploring the Universe. Thanks to its ultraviolet and infrared cameras, astronomers spotted five FRBs.Â

Hubble’s accuracy is also brilliant. It has an excellent resolution, and its imaging allows astronomers to understand better the overall host-galaxy traits, including the star-formation rate and the mass.Â

“This is the first high-resolution view of a population of FRBs, and Hubble reveals that five of them are localized near or on a galaxy’s spiral arms,” explains Alexandra Mannings, an astronomer from the University of California, Santa Cruz.

How are these FRBs

Newly discovered FRBs come from the dimmer areas of spiral arms around galaxies. As per astronomers’ research, spiral arms are where the youngest, hottest stars in a galaxy stay. The new FRBs, though, don’t come from such brightest parts.

You can see below only four of the FRB locations: 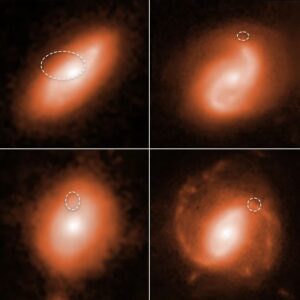 In this case, astronomers believed the FRBs actually come from flares from a young magnetar. But how?Â

Usually, massive stars experience a stellar evolution and turn into neutron stars. Some can be highly magnetized, and flares and magnetic processes can pop up on their surfaces. Finally, this phenomenon can trigger and emit radio light.

More answers will be soon available as astronomers succeed to solve a bit more of this intriguing puzzle.