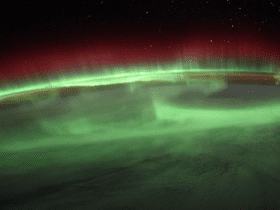 A new mystery about Uranus has just been unveiled! Astronomers detected quite the phenomenon on the enigmatic ice giant planet, something odd yet intriguing.

Using NASA’s Chandra X-ray Observatory, a team of researchers wanted to see more than hydrogen and helium on Uranus. And they succeeded. Apparently, some X-ray-based activity has resurfaced, leaving astronomers in awe.

In a new paper, the team of researchers detailed all the processes and data they used. By analyzing observations taken of Uranus in 2002 and 2017, researchers succeeded in seeing a precise detection of X-rays.

The discovery is supported by a graphic, where pink represents a Chandra X-ray shot of Uranus from 2002, superimposed on an advanced optical photo from the Keck-I Telescope from 2004. You can see the full result below: 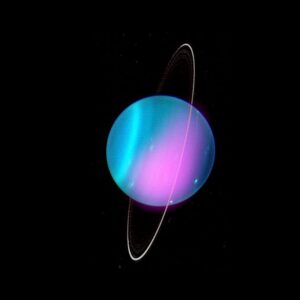 Astronomers are pretty amazed by the discovery. What could cause the ice planet to emit X-rays? Well, the answer is simple: the Sun.

According to observations on both Saturn and Jupiter, astronomers found out how they throw X-ray light given off by the Sun. Such a phenomenon is quite familiar.

On Earth, for example, something similar happens. Our planet’s atmosphere can throw, too, the Sun’s light.

However, not all X-rays on Uranus are from scattering. The team explained that there is another source involving Uranus’ rings.

Uranus, known for its two sets of rings around its equator, is hiding deep mysteries. These rings could generate X-rays themselves, similar to Saturn’s rings.

Finally, the last factor is that at least some of the X-rays originate from auroras on the giant ice planet. This possibility might turn out to be accurate because astronomers observed the phenomenon on Uranus before.

Figuring out the reason and other details could help astronomers understand better how more mysterious space objects really hide.