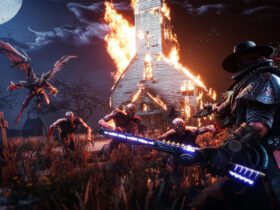 Check Out the Trailer for ‘Evil West’ – Release Date REVEALED

The Bugsnax game can be extremely fun if you’re into exploring islands in order to find creatures that are half bugs and half snacks. Well, yes, that means pretty much nobody, but who knows what interesting hobbies you can develop after playing a crazy video game like Bugsnax!

Bugsnax is even getting “The Isle of Bigsnax,” meaning a new expansion that will bring many more exciting things to the main game. The update is free, and you might be interested in what it has to offer. Last but not least, the same update will make the game available for more platforms.

Developer Young Horses launches a new trailer to explain more about what the update will bring to Bugsnax. Except for bringing a whole new island to explore, the update also makes the game available for Steam, Switch, and Xbox consoles.

The developer’s description of the expansion is very clear:

Surprise! Bugsnax is dropping on Steam, Xbox & Nintendo Switch on April 28! All Bugsnax players will also get a free new update: The Isle of Bigsnax! adds around three hours of new story and quest content where you explore a strange island that has risen from the sea, crawling with giant-sized Bugsnax.

Initially, Bugsnax was available only for PlayStation consoles (both PlayStation 4 and PlayStation 5), macOS, PC, and Macintosh. However, the players had plenty of reasons to hope that the game would become available for other platforms as well. It seems that someone up there loves them!

The new island that will become available in Bugsnax to explore contains a lot of new stories, quests, and even supersized Bugsnax. That means even more challenges and exciting content for the players than before, and the future sounds pretty good for the game!