PlayStation Plus Allows Subscribers to Play GTA 5 for FREE

The six-exoplanet system (TOI-178) recently discovered might be the biggest challenge astronomers have met. Five of the exoplanets are in an odd yet unique rhythm around their star, but that’s not all.

According to new observations, astronomers believe that the system could offer significant clues about how planets develop and evolve.Â

New Research Insights: What Should You Know

The recent research unveils how the system possesses six exoplanets and that all but the one nearest to the star are in resonance. What does it mean?

Some patterns repeat themselves as they move around the star, while some planets align every few orbits. The TOI-178 system has an 18:9:6:4:3 resonance.Â

Yann Alivert, the co-author of the research, released a statement about the system’s past. He said:

“The orbits in this system are very well ordered, which tell us that this system has evolved quite gently since its birth.”

The planets’ densities are disordered 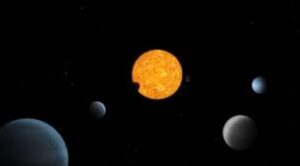 What intrigues astronomers is how disordered the planets’ densities are compared to the orbits’ perfect arrangement.Â

For instance, one of the system’s planets is as thick as Earth, while other is fluffier, with almost half Neptune’s density, followed by a planet with a similar density as Neptune. Such a mess is quite odd for our Solar System, where the planets are usually well-arranged.

Even if the TOI-178 system is so unusual, astronomers still believe that it has more to offer.Â

To examine the system, the new research team used data from ESO’s VLT, the ESA’s CHEOPS satellite, and the NGTS and SPECULOOS. Next, they combined that with techniques such as imaging transits and radial velocities. The results are genuinely intriguing.

The team collected essential information about TOI-178 and its planets, which appear to orbit their central star much closer and much faster than our planet orbits the Sun.Â

Moreover, the planets are approximately one to three times the mass of our planet, some are rocky but bigger than Earth, and others are gas planets.

By continuing their observations, astronomers believe they might find more planets in TOI-178’s proximity or even similar exoplanet systems.