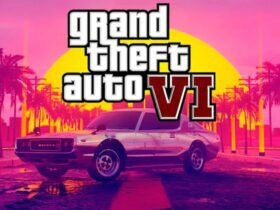 Astronomers detected an intriguing gas giant planet that orbits a star in a triple star system. As confusing as it might be, such a thing is not that weird at all.


The system, dubbed KOI-5, is part of the Cygnus constellation, and the exoplanet therein has been discovered a long time ago by the Kepler space telescope. What’s so special about this system?Â


Fortunately, that is about to change.

Astronomers utilized the Gemini North telescope, the Palomar Observatory, and the WM Keck Observatory to examine the system. Back in 2014, two companion stars, KOI-5B and KOI-5C have been spotted.Â

Later on in 2018, the TESS space telescope continued the work and identified a candidate exoplanet orbiting KOI-5A. From there, more observations and investigations followed.

Astronomer David Ciardi of NASA’s Exoplanet Science Institute, and his team, reexamined all previous data in what seemed to be a forever job. Great insights have been uncovered.

The team discovered that there is indeed an exoplanet that orbits around KOI-5A. The planet is in a weird position to at least one of the stars in the triple system.Â

The planet has also been identified as a gas giant. It is approximately 7 times the size of our planet, on just a five-day orbit around KOI-5A.Â 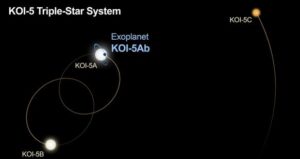 Astronomers also detailed that both KOI-5A and KOI-5B are the same sizes as the Sun, creating a somehow close binary. The orbital period is approximately 30 years.

As for the third star, KOI-5C, the team pointed out that it orbits the binary at a longer length, around 400 years.Â

Ciardi released a statement about the significance of the system. Here’s an excerpt of that:

“By studying the system in greater detail, perhaps we can gain insight into how the Universe makes planets.”