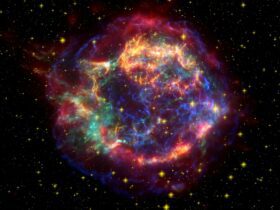 The steady but slow bursts of light from numerous red giants may no longer be a mystery, as scientists found a potential explanation.

A new study says that the peculiar fluctuations in brightness are not provoked by internal processes.

Instead, they result from binary companions obscured in lumps of dust gathered together by the dying giants.

Intermediate mass stars (with masses approximatively eight times the Sun’s mass) have a limited life span. When they are nearing the twilight of their lives, some severe changes start to happen.

When all of the Hydrogen inside fuses to helium, the nuclear fusion process can no longer work, so it stops, and then the core begins contracting, which, in return, syphons some extra hydrogen into the region close to the core, producing a hydrogen shell, and the fusion begins again, pumping helium inside of the core.

That process is known as hydrogen shell burning.

When that happens, the outer layers of the star expand severely.

When that happens to our Sun, it will expand beyond Earth’s orbit, but that is a natural process.

Betelgeuse, the red giant star, is a trendy study subject. It has multiple brightness cycles, as its luminosity varies over time.

They are provoked by acoustic waves bouncing around inside of the star as it dilates, contracts, and the dilates for another time.

One of those brightness cycles is known as a “long secondary period”, and it is 5.9 years long.

The curious part about those brightness cycles is that they can’t be explained in the same way as the rest.

Some explanations have been put forward for the events.

A team of astronomers under the lead of Igor SoszyÅ„ski from the University of Warsaw in Poland analyzed the red giants with long secondary periods.

They put together optical and mid-infrared imagery of 16,000 of the stars from all of the available study data. They found approximately 700 stars with a well-defined infrared light curve – a plot of how the light spectrum evolves over time for in-depth analysis.

When analyzing the optical and infrared light curves for the 700 stars, something peculiar was discovered. Both light curves for all the stars featured a significant dip, as expected, according to the stars’ dimmer periods. But for approximately half of the stars, a second shallower dip was observable but only in infrared wavelengths, somewhat opposite to the primary dip.

The team said that the observation is a significant clue.

Mid-infrared light is often the result of dust because it absorbs starlight and emits it further at longer wavelengths.

That can very well explain the phenomenon that plagues the red giant stars.

If a star is orbited by a smaller companion that “stole” some material from the star, leaving behind trails of dust in the form of clouds, a long, substantial dip in starlight will occur at all wavelengths.

However, as the dusty objects travel around the side of the star, we can see mid-infrared light as starlight gets absorbed and then re-emitted at a different wavelength.

The whole mechanism is explained in The Astrophysical Journal Letters.

The team’s discovery may help astronomers better understand the phenomenons that take place in outer space.

A better understanding of stars’ evolution can help predict how Earth’s Sun will behave and change over time.