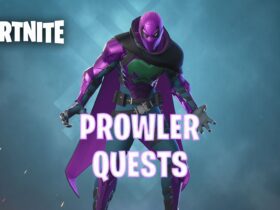 Fortnite Prowler Quests: How to Complete Them and Unlock the Prowler Skin

Because of a “potential failure” in one of the six reaction wheels used to modify the orbiting explorer’s attitude, the spacecraft has been placed in safe mode.
NASA has suspended direction-based scientific observations until it can either give the all-clear or resume operations with five wheels, but what went wrong is unclear. NASA has not said what caused the problem.

According to NASA, this is the first probable reaction wheel issue since the Swift Observatory commenced operations in February 2005.
The rest of the vehicle, on the other hand, is in good operational order.

Over the last two decades, the Swift Observatory has played a significant role in advancing astronomy.
It was mainly designed to detect gamma-ray bursts, and it now detects around 70 each day.
However, it is increasingly being utilized as a catch-all observer over a wide range of wavelengths, allowing it to detect solar flares and difficult-to-see stars.
NASA would not necessarily face significant consequences if Swift suffers a long-term malfunction, but the agency would definitely benefit from having the spacecraft operating as smoothly as possible. 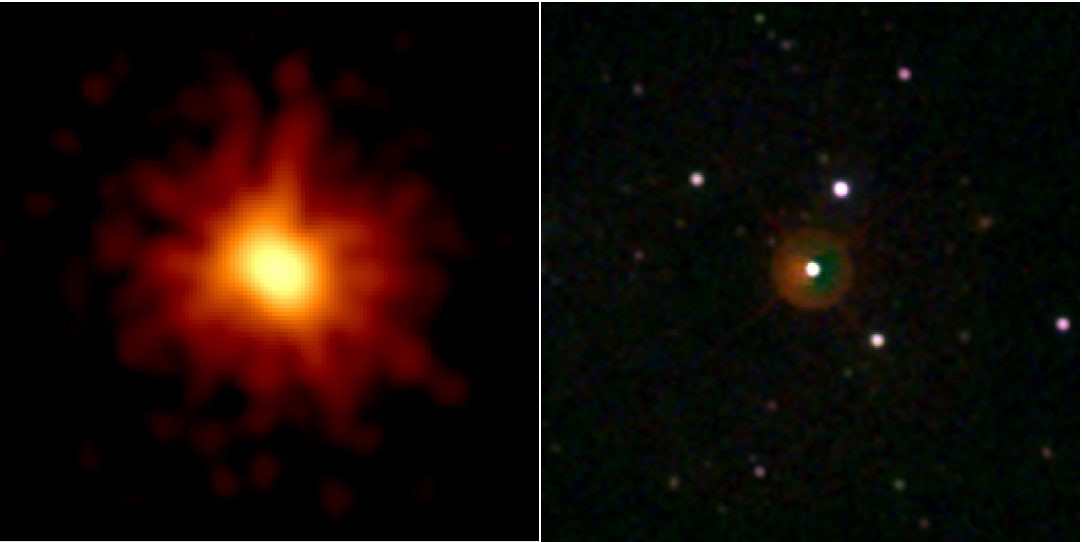 GRB 080319B was a gamma-ray burst (GRB) observed by the Swift satellite on March 19, 2008, at 06:12 UTC. It was the first GRB identified by the Swift spacecraft.
The burst created a new world record for the furthest object that could be seen with the naked eye; it had a peak visual apparent magnitude of 5.7 and was visible to the human vision for about 30 seconds, breaking the previous record of 5.2 seconds.
The magnitude was brighter than 9.0 for nearly 60 seconds throughout the observation period.
If it had been seen from one astronomical unit distance, it would have had a peak apparent magnitude of 67.57, 21 quadrillion times brighter than the Sun seen from Earth. 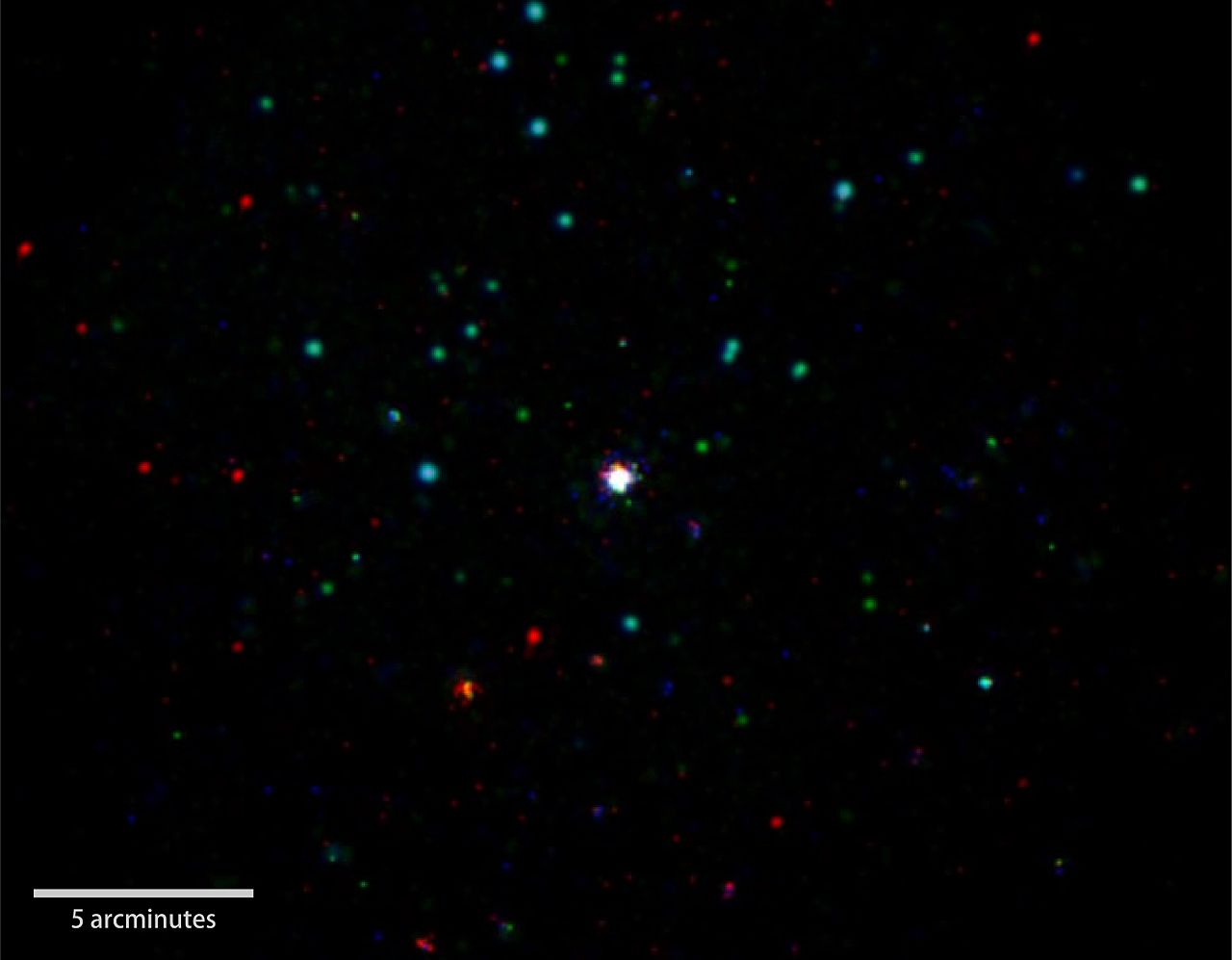 In this composite picture of X-ray, ultraviolet, and optical wavelengths, GRB 151027B, Swift’s 1,000th burst (center), is shown.
Swift’s X-Ray Telescope, which started studying the region 3.4 minutes after the Burst Alert Telescope identified the explosion, recorded the X-rays.
Swift’s Ultraviolet/Optical Telescope (UVOT) started observations seven seconds later and was able to detect a brief flash of visible light from the explosion in ultraviolet light.
The picture comprises X-rays with energies ranging from 300 to 6,000 electron volts, mainly from the burst, as well as lower-energy light observed via the UVOT’s visible, blue, and ultraviolet filters. The UVOT’s visible, blue, and ultraviolet filters created the image (shown, respectively, in red, green, and blue).
The photograph was exposed for 10.4 hours during the day. 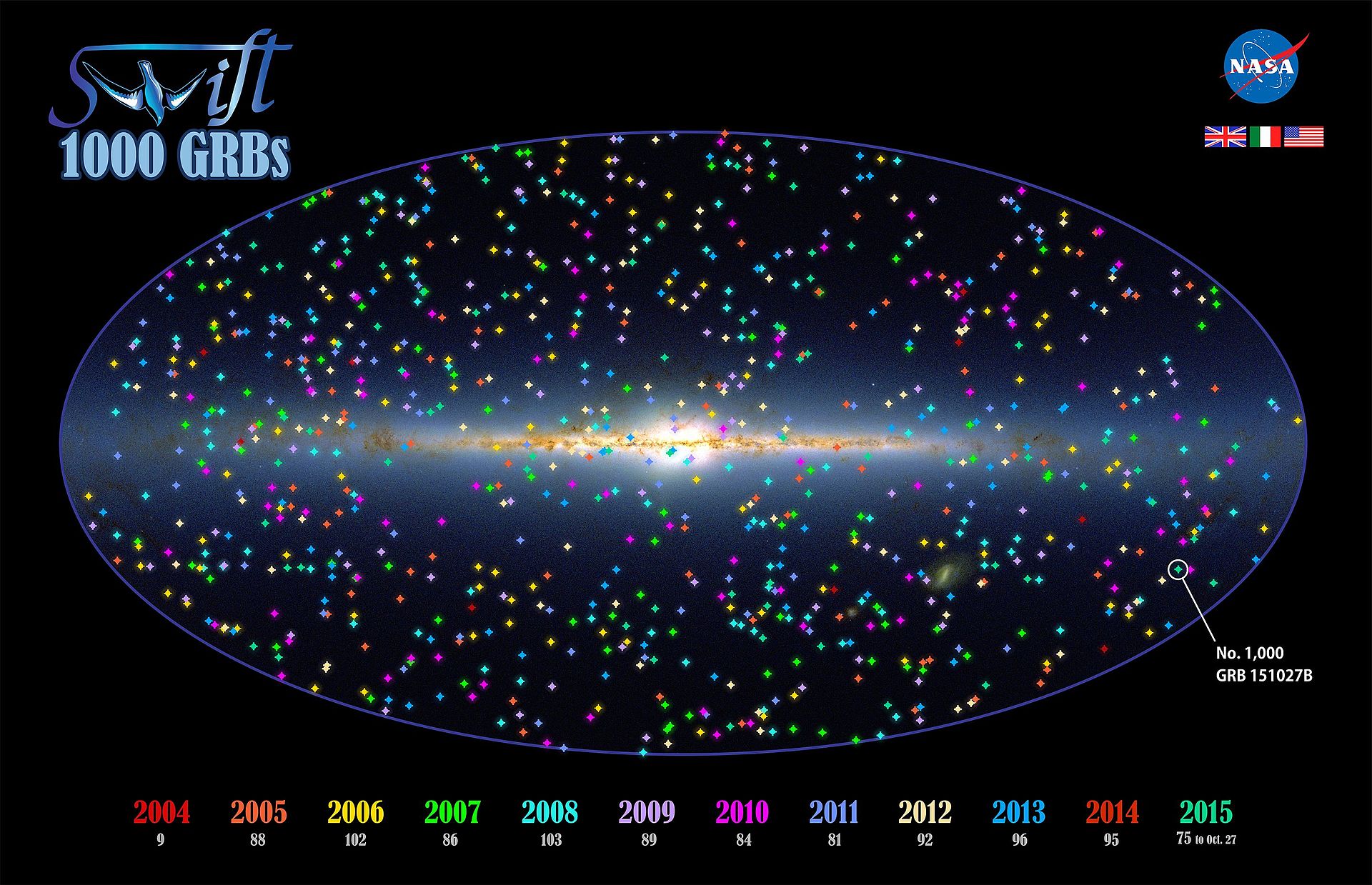 The coordinates of 1,000 Swift GRBs are shown on an all-sky map that has been positioned such that the plane of our galaxy, the Milky Way, passes across the center.
The location of GRB 151027B is given at the bottom right, and the colors of the bursts are color coded according to the year.
For each year, underneath the label, is a running total of the number of bursts that Swift has identified in that year.
Background image courtesy of the Two Micron All-Sky Survey’s infrared camera.