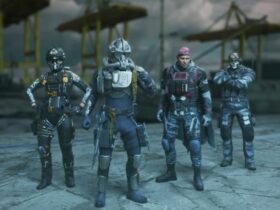 Last year, when HP hinted at quite the ambitious ChromeOS project. This year, at CES 2023, the company finally unveiled the much-awaited HP Dragonfly Pro Chromebook and is definitely taking two steps further!

Discover more about the new HP Dragonfly Pro Chromebook below and find out why it really stands above others.

HP Dragonfly Pro Chromebook has just made its debut, and it totally stands out! It comes with the “world’s brightest touchscreen display” for a ChromeOS laptop, measuring up to 1200 nits with an incredible ambient light sensor, starting at a slightly bigger 14-inch (up from 13.5 inches) LCD.

The Chromebook also has an 87.6% screen-to-body ratio, 100% sRGB color gamut, and the “world’s first 8 MP user-facing camera in a clamshell Chromebook,” according to HP. Quite impressive, isn’t it?!

The HP Dragonfly Pro Chromebook features a programmable RGB backlit keyboard, which is often reserved for gaming laptops (well, hello there!). And with B&O’s name clearly displayed on the side, the speaker grills are part of two up-firing, and two down-firing systems flank the keys. Also, the haptic trackpad is back, and the fingerprint sensor has been relocated to the function key row between the volume up and power, which is really cool!

Other specs include Wi-Fi 6En, BLTE 5.2, and an H1 secure controller. The laptop weighs 3.33 pounds and comes in Sparking Black and Ceramic White shades.

HP will soon release more details about the HP Dragonfly Chromebook, such as the price tag!