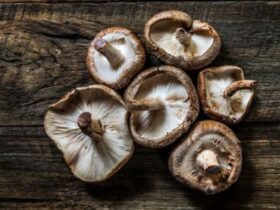 Mushrooms For Your Skin Care Routine – Facts, Benefits, and More

Since Goku first achieved the Ultra Instinct transformation back in the Tournament of Power when he was fighting Jiren, it became clear that it’s hard for Vegeta to come up with a power that can rival the new form. Goku was tremendously stronger than ever at that point.

Later on, the manga version of Dragon Ball Super continued the story long after the conclusion of the tournament. Vegeta managed to develop a powerful transformation that could rival Ultra Instinct, and it was known as Ultra Ego. But we all know that Goku always has to be one step in front of the Saiyan Prince, and Dragon Ball always has to come up with newer and newer transformations for everybody. Not everyone likes the recipe, of course, but maybe that’s exactly what the writers are betting on!

In the latest manga chapters, Goku and Vegeta have to face Gas, probably the strongest foe ever. Goku taps into a new Ultra Instinct version known as True Ultra Instinct, in which he maintains his black hair state instead of turning gray as it happened during the Mastered Ultra Instinct state. Surprisingly enough, Goku is stronger than ever when he achieves the True Ultra Instinct form, as he finally dominates Gas in battle.

According to comicbook.com, the official name of Goku’s new Ultra Instinct form is revealed by the official Dragon Ball website:

When Gas was about to finish Vegeta off, Goku rescued him, and then, he manifested Ultra Instinct in his black-haired state! Applying his emotions with Ultra Instinct, Goku had finally awoken the ‘True Ultra Instinct’! This power overwhelmed Gas, ‘the greatest warrior in the universe’ by knocking him to the ground with one mighty blow.

However, we all know how things usually go in Dragon Ball: it’s not over ’til it’s over. So there’s no use thinking that Gas is finally defeated. Most likely, the Heeter still has an ace up his sleeve, and we’ll find out soon enough from the manga.