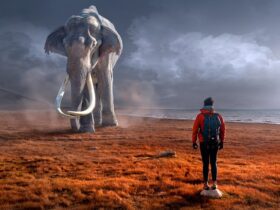 The Science Of De-Extinction: Why Bringing Back Extinct Animals Is Not As Crazy As It Sounds

In Chapter 3 of Season 3 of Fortnite (better known as the Vibin’ Update), finding Geysers is a breeze, which is great since there is a daily challenge that requires players to ride a Geyser to fulfill.
For those who don’t aware, Geysers are natural means for players to propel themselves into the sky using scorching hot water and then glide to another location. The Rift-To-Go is a less practical yet more accessible alternative. So, let’s start by looking at where they may be discovered in Fortnite’s game world.

Where Are Geysers Located? It’s an easy answer: Reality Falls is where they are. Taking the place of Camp Cuddle, the colorful forest of vivid purple trees and gigantic blue mushrooms in the new Season of Fortnite is called Reality Falls. However, due to the beauty of the area, it might be difficult to locate the Geysers, particularly because they aren’t marked on the map.

With the use of the interactive map on Fortnite.GG and some research in the Battle Lab, we’ve discovered that the Reality Falls/Greasy Grove region has a total of 12 Geysers.

There don’t appear to be any more Geysers on the Fortnite map outside those twelve. Let us know if you managed to find all of them.