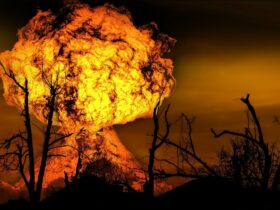 Firestorm Covered 10% of the Earth’s Surface 3,000 years ago, Causing an Ice Age.

‘Who would win in a fight between Goku and Superman?’ is one of the oldest questions on the internet. Dragon Ball fans would bet their money on the Saiyan without a doubt, while the Superman fans, on the other side, have faith in their boy from planet Krypton.

What’s for sure is that Goku and Superman would definitely make a good sparring team, although it may sound like a blaspheme for some Dragon Ball fans to see their beloved character alongside Superman. Considering Goku’s abilities to form relationships fast, those two have a high chance of getting along just well. An artist has also imagined such a scenario, as he draws both Goku and Superman as they swap outfits. Here’s the result:

Goku was introduced in the ’80s thanks to the very first Dragon Ball series that has been concentrating on his life as a child. But he was definitely no ordinary kid, as he possessed a lot of strength that made him capable of cracking rocks or withstanding bullets. Goku always wanted to become stronger, and he became light-years more powerful when he became an adult. Over time, a lot of Dragon Ball-related content was released – new anime series, toys, video games, and more.

On the other hand, Superman has a much longer history. The character was introduced almost 100 years ago, as he debuted in the comic book Action Comics #1, after being created by artist Joe Shuster and writer Jerry Siegel.