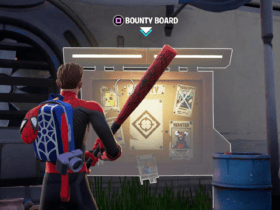 Fortnite Chapter 3 Season 4 will soon come to an end, and now there’s a countdown in the lobby hinting that the big finale is close.

Epic Games confirmed Fortnite Fracture as Chapter 3’s huge finale event for December 3 at 4 PM ET. We could expect a concert, like the previous Ariana Grande’s Rift Tour, or even a battle similar to the Galactus one. Either way, we’ve compiled a little guide on everything that could possibly happen, starting with the current countdown.

As Fortnite Chapter 3 Season 4 is getting closer to its big finale, a curious countdown has appeared in the lobby. What does it really mean? Also, what will happen at the end of the countdown?

Well, be ready for some huge surprises because Epic is rumored to bring some goodies soon to Fortnite, including an event called Fortnite Fracture.

The event is scheduled to air on December 3 at 4 PM ET.

The current countdown in the Fortnite lobby is definitely hinting at that significant event and probably even more. Epic Games didn’t release anything else, which is upsetting, apart from one thing.

The devs said that it would be an “otherworldly and unexpected social event” and “the fate of the Island” really depends on all Fortnite players. That’s quite impressive, isn’t it?!

However, we should be able to come across more details in the coming days as the countdown gets closer to a finish.

The Fortnite Fracture live event will mark the end of Chapter 3 Season 4, and Chapter 3. So, this is pretty much huge, especially when we’ve all expected a Season 5.