Ever wondered what does it look like inside a planet? How about Saturn’s interior?

Recent work of Johns Hopkins University offers now a sneak peek inside Saturn, and things are as great as you can imagine. The intriguing glimpse of our planetary neighbour’s interior also reveals how the planet’s magnetic field is influenced.

Saturn is among the planets in our Solar System that has quite the features. The planet has an odd yet intriguing magnetic field that seems almost perfectly symmetrical around the rotation axis. How cool is this? 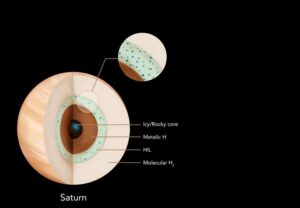 Lower temperatures and a layer of helium rain

As per new simulations of Saturn’s interior, we find that a dense layer of helium rain influences the planet’s magnetic field quite a lot. And that’s not all.

“One thing we discovered was how sensitive the model was to very specific things like temperature,” explained Sabine Stanley, a Johns Hopkins planetary physicist.

How did they do it?

For the recent simulations, scientists fed data collected by the Cassini mission into powerful computer simulations. The procedure was similar to the one we use to examine climate and weather.Â

Even if Saturn’s magnetic field seems almost perfectly symmetrical, the new simulations showed something else. Apparently, a slight level of non-axisymmetry could actually exist near the planet’s south and north poles.

Those findings indeed offer another perspective of the way Saturn is and manifests. More research will follow, and maybe we could finally be able to solve some old issues, including how to measure the rate at which Saturn rotates.