As new research emerges, we learn the Amazon is at risk of collapsing, influencing global climate more than previously thought.

Recent research explains how the Amazon forest is now threatening Earth with more heat-trapping gases than it stores in soil and plants. So, it will warm the atmosphere instead of cooling it. But that’s not all.

The tropical rainforest can no longer help balance greenhouse gas emissions, including burning fossil fuels. Such consequences are shocking.

Kristofer Covey, an ecologist and the lead author of the research, released a statement. He said:

“But when you start to look at these other factors alongside CO2, it gets really hard to see how the net effect isn’t that the Amazon as a whole is really warming global climate.”

According to some scientists’ estimations, the Amazon could turn into a carbon source as soon as 2035. Also, the illegal land-clearing activities are already too high, and the forest is quickly reaching a catastrophic “tipping point.”

However, CO2 is not the only factor triggering our planet’s climate.

The two gases are powerful as greenhouse gases, but they don’t last as much as CO2. For instance, N2O can trap up to 300 times more heat/molecule than CO2 did.

Below, you can see how those gases tip the scales in the Amazon: 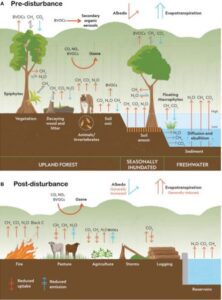 We must understand that protecting the Amazon is a more urgent mission now than ever. That includes restoring indigenous land rights and controlling deforestation.