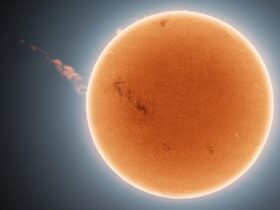 What is This Plume of Plasma Coming Out From the Sun? Astrophotographer Reveals Stunning Photo

Tesla is getting ready to give smartphone manufacturers like Samsung and Apple, as well as others, a tough run for their money. Curious about the how and the why? The first phone produced by the company will be available for purchase very shortly.

The Tesla Pi Phone will reportedly become available for purchase in the month of December 2022, as stated by a story published on mashable.com. After having considerable success in the automotive and aerospace industries, Tesla is now attempting to break into the lucrative smartphone industry. The upcoming phone by Tesla would reportedly be equipped with a 6.7-inch OLED display, as stated in a report by The Tech Outlook. While some of the other qualities include a pixel density of 458ppi, a refresh rate of 120 HZ, and a brightness level of around 1600 nits, among others, the display also has additional characteristics. The phone will contain 8 gigabytes of random access memory (RAM), 512 gigabytes of storage space, and a triple camera arrangement, each of which will have a resolution of 50 megapixels. The front-facing or selfie camera will have a resolution of 40 megapixels.

In addition, the source states that the phone will have a weight of approximately 240 grams and will be available in the color black when it first hits the market. In addition to that, the battery capacity of the phone is projected to be 5000 mAh. It is important to note that there is currently no information available on the cost of the phone; nevertheless, rumors suggest that the price will be somewhere in the range of 860 to 1000$.

Elon Musk is very busy with other projects at this time. Recently he became the new owner of Twitter, and he is currently working to reform the platform while dealing with a multitude of controversies. Before that, he introduced a new fragrance. Jokingly, he asked customers to buy his cologne so he could acquire Twitter.