An incredible close-up of Mars’ massive canyon is now available thanks to NASA’s HiRISE.Â

The University of Arizona has released the images, offering more details. HiRISE shot the canyon in an attempt to determine the origins of it.

HiRISE’s Data Brings Useful Information: What Should You Know

Mars’ canyon, known as the Valles Marineris, is approximately ten times longer and up to five times deeper than the Grand Canyon. Such a thing makes it the biggest canyon in the whole Solar System.Â

And even if that record is impressive and all, scientists still don’t know how the canyon emerged. They have been utilizing NASA’s HiRISE to shoot and examine the images.Â

Previous theory suggests that Mars’ crust was once scattered by magma. The picture below supports such a thing. 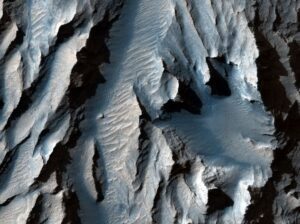 However, none of the current research would be possible without an intelligent camera.

The recent pictures are shot using HiRISE’s high-resolving zooming skill to capture closer snaps at various sizes of Mars to discover patterns and differences in the ground. Such things help scientists find out answers to some of the most puzzling questions.

For instance, scientists determined angular “slashes” on the surface that could show thawing and freezing cycles. This information is not much, but it’s very significant. They’re also made visible thanks to NASA’s HiRISE.Â

Scientists can also continue to examine the Red Planet more precisely and determine if life ever was able to survive finally.