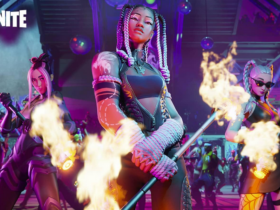 Fortnite: Weapon Charms Might Be a Huge Thing Soon

There have been a number of glitches in Chapter 4 Season 1 of Fortnite, including one that allows players to have unlimited charges with the Shockwave Hammer item, making it overpowered. Players are hoping that Epic Games will fix the glitch soon, as it did in the case of others.

The Shockwave Hammer is a valuable item in Fortnite Chapter 4 Season 1 because of its versatility. It can be used to deal damage, quickly travel across the island, and avoid fall damage. Without the glitch, it has a limited number of charges and a 20-second cooldown period.

In other words, some players can exploit the glitch to move incredibly fast across the map. It’s also not hard to activate the glitch; simply touching the water in the game can be enough.

How to counter the Shockwave Hammer

Thanks to Sportskeeda, we know a way to counter the Shockwave Hammer in Fortnite: Need to escape the clutches of a glitchy Shockwave Hammer? Just whip out the Party Time augment and let the balloons lift you to safety! Now you’ll be out of reach and ready to take on the next challenge, all thanks to the power of party decorations. Just make sure to use them wisely because you never know when you might need to make a quick escape from a pesky hammer with infinite charges.

While the fans hope for Epic Games to fix the Infinite Hammer glitch soon enough, the developer could at least ban players who take advantage of it.

Fortnite can be played on a number of platforms, including Windows PC, Mac, Xbox, PlayStation, Nintendo Switch, iPhone and iPad, and Android phones and tablets. It can be downloaded and installed directly onto a device or played through a web browser, and players can also continue their progress on a different device if needed.