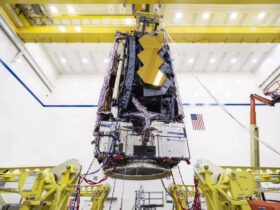 The Hubble Space Telescope celebrates 31 years of work with a breathtaking photo. The Universe exhibition is something that fuels our imagination and leaves us with our jaws constantly dropped. Thanks to Hubble’s fantastic work, we came across many incredible shots of stars, galaxies, and other cosmic features. The new picture is no exception and the story behind it is even more incredible.

Hubble captured a giant, ultra-bright star dubbed AG Carinae, somewhere 20,000 light-years away from our planet. As intriguing as this might be, that’s not the whole story.

Giant Star Captured by Hubble on the Brink of Annihilation

The ultra-bright star was in a phase that makes it an LBV (Luminous Blue Variable). Such a phase means the giant star will go through thousands of years of varying and instability luminosity. Things, however, are more complicated than that.

Hubble captured the star battling itself as it tried to avoid destruction. What do you think happened?

Below, you can see the incredible shot: 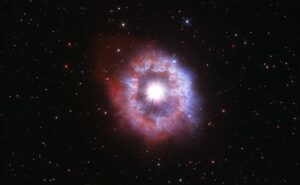 You can notice a massive nebula as a pulsating shell of crazy colours surrounding AG Carinae. This nebula is about 5 light-years wide and marks an eruption that occurred many thousand years ago.Â

The shell contains gas and dust, and where you can see some red stuff, that’s just glowing hydrogen gas mixed with nitrogen gas. The blue material is dust clumps discharged from the star.

So, you can understand what really happened to the giant star.

Outbursts like this one can occur a few times during the lifetime of an LBV. In the AG Carinae’s case, a high volume of material (approximately 10 times the Sun’s mass) had been pushed out.Â

Thanks to Hubble, we get to see this incredible event and study these types of stars. The telescope began its mission back on April 24, 1990, and made over 1.5 million observations of about 48,000 celestial objects.